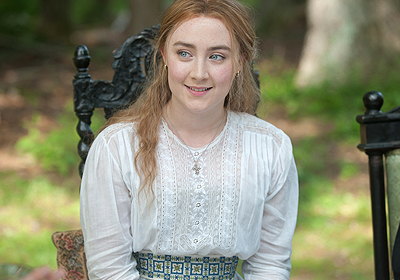 "The script and performances are excellent, but the film is merely a pleasant watch "

There have been plenty of films based on the works of Russian playwright Anton Chekhov, and as The Seagull is one of his most famous plays, it’s no surprise it’s been adapted for the screen a few times - and now there’s a new one, directed by Michael Mayer and adapted by Stephen Karam, for this generation.

The film revolves around love triangles and unrequited love. Renowned stage actress Irina (Annette Bening) returns to her family's country home in Russia for the summer with her lover, the successful writer Boris (Corey Stoll). Local girl Nina (Saoirse Ronan) falls under his spell, despite being in a relationship with Irina's son Konstantin (Billy Howle), who is struggling to establish himself as a writer. Boris becomes torn between Irina and Nina, and Konstantin is overcome with jealousy and by the inability to make his mother proud.

I had feared the film would be a stuffy, high-brow period piece that would be hard to digest because Chekhov’s play is from 1896, but it was very accessible and easy to enjoy. It was also funnier than expected, mainly thanks to Bening and Elisabeth Moss, who is so in love with Konstantin that she’s depressed and self-medicating with drugs and alcohol.

The female cast members were the most impressive, leading with Bening, who is self-obsessed yet insecure, a woman worried about losing her looks and losing her man to a young girl. Also deserving of a shout out is Moss, who plays Masha, the daughter of the estate manager. She is so sad about their unrequited love that it's almost funny and she's hysterical when she's drunk, although Moss also gives her emotional weight, so she isn't just for comedy value.

Ronan usually blows me away in every single one of her roles, but she didn’t stand out in The Seagull, perhaps because she’s starring alongside Bening and Moss. Stoll was fine, but the biggest weakness was Howle; his American accent was confusing and it seemed to come and go all over the place and didn’t seem natural and his performance was quite over-the-top.

The Seagull was visually beautiful, with gorgeous locations and period costumes, particularly Irina’s, the script was well adapted from Chekhov’s play and easier to follow than expected and the majority of the cast put on top performances, but I wasn’t thrilled by the adaptation. The ending should have been shocking and upsetting but I wasn’t moved by it, because it was too subtle and understated and I was left reeling when it cut to the credits, but I guess that the source material is to blame, although Mayer could have tried to make it more dramatic.