The Wonder(2022) by Federica Roberti 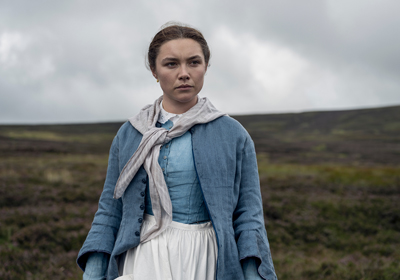 Adaptated from the homonymous and acclaimed 2006 novel by Emma Donaghue, The Wonder poses a centuries old question: “how far are we willing to go to blindly believe in miracles?”.

Set in the Irish midlands in the 1860s, The Wonder follows Libby Wright (Florence Pugh), a well established nurse who, along with a nun, is assigned to watch over Anna O’Donnell. Anna is believed to be surviving and thriving even after months of fasting, all thanks to “manna from heaven”. The little town council needs proof before declaring her a miracle.

As a woman of science, Libby’s duty is to watch over the little girl and her health while making sure that nobody is actually feeding her.

The film is a well made and perfectly crafted period piece by Sebastián Lelio, who is now accustomed to portray strong and deeply complex women. The only questionable choice is the beginning of the movie, which starts on a real film set, were the audience is reminded that, although this is a fictional story, its characters believe in their reality. A bold stylistic choice, that however, doesn’t add any particular meaning or depth to it. But rather startles the audience who could have been easily transported in another era by the natural beginning of the film.

In spite of the unusual beginning, Lelio’s directing style immediately takes the audience back in time and allows them to get lost in the past and the events which are unfolding. The scenography does a good job in painting the picture of a Country who is still battling the famine that has already taken so many lives, and the camera moves from the desolation of the Irish countryside to the barely furnished rooms, highlighting a general sense of hopelessness and grief.

It is this desperate background that is forcing men and women of faith to try and cling to even the tiniest hope for a miracle in the form of a child who seems to be surviving without eating anything for months. The blind faith embodied by the town council clashes inevitably with Libby’s sense of duty and belief in facts and science over religion.

Choosing Florence Pugh to portray such a resolute woman is of course a no-brainer. Pugh is now well renowned for her talent in portraying complex and well rounded female figures. Her acting skills can easily tap into any emotion, bringing to the screen a relatable character and highlighting the duality of her resolution to discover the truth at all costs as well as knowing the pain of watching someone you love die for no good reason.

Pugh’s performance is made stronger by her partnership with Kíla Lord Cassidy, who plays Anna. Libby’s bond with Anna becomes stronger throughout the film. And while at the beginning Libby tries to keep a professional composure to discover the truth, by the end, she is just moved by her own emotions and grief for this young girl who is been used as a prop to summon a miracle to restore faith in people.

Both of them are prisoners of traumatic events and, through this experience, they both become each other’s saviours.

As a whole, The Wonder is a well made period drama centred around the eternal battle between religion and science. A story about how far we are willing to go to uncover the truth, no matter how difficult it is.