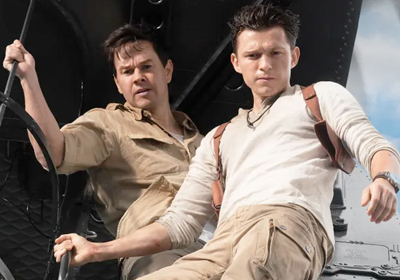 "anything lost, can be found"

Based on the popular video game, Uncharted is a fun, action/ adventure thrill ride in the vein of Indiana Jones and National Treasure, starring Tom Holland and Mark Wahlberg. I haven’t played the games so I had no preconceived ideas about the film going in, I had heard the chatter online about how Holland is too young to play Nathan Drake, but the thing is that Sony clearly want this to be their next franchise, so he will grow into the role and with all his successes, Tom Holland is hot right now, so pinning another franchise on him is not a bad thing, he's a very capable actor.

Both Holland and Wahlberg are wonderful in their roles of Drake and Victor “Sully” Sullivan and the film follows the Globe trotting pair joined by Sophia Ali’s Chloe Frazer as they try to find the lost treasure of Ferdinand Magellan, following the notion that ‘anything lost, can be found’.

Holland and Wahlberg have fantastic chemistry together, they play off of each other really well, with a hint of mistrust on both sides, as they embark on this adventure which is full of tricks and traps as they try to find the treature.

Hot on their trail is Antonio Banderas’ villainous Santiago Moncada who is trying to restore his family’s wealth and Tati Gabrielle’s Braddock who has ideas of her own.

Seeing this spectacle in IMAX is the best way to do it, the sheer scope that Ruben Fleischer and his creative team have put on screen is breathtaking. I’d watch another one, it’s fun and doesn’t take itself too seriously, and that’s needed for a film of this scale.

We have had some really good films adapted from video games over the last year or so and long may it continue.