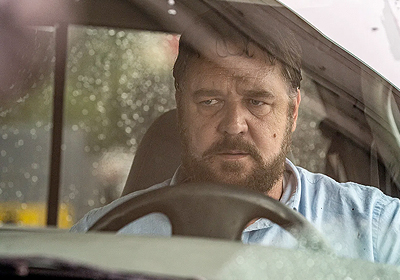 "Upon the opening scenes of the film, I felt this was going to be a good one, and that was proven to be the case."

The film starts with a young mother named Rachel (Caren Pistorius), who seems to be having a bit of a bad morning, where she is running late, experiencing difficulties with a divorce, and ends up in several queues of traffic no matter which way she goes to try and avoid it.

She ends up in a road rage incident where someone in the car in front doesn’t move when the lights turn green, and instead of honking her horn in a friendly way, she holds down the horn, twice, before speeding off before the lights end up on red again.

Much to her bad luck, the guy (Russell Crowe) she ends up getting enraged with, is a violent psychopath who is adamant on getting his revenge and doesn’t seem to care who ends up in his way. He ends up injuring many people along the way all whilst seeing red, which viewers who watch this movie, will be able to see straight away.

The opening of this movie had me hooked with questions on what had happened before more of the story unravels and left me questioning whether the beginning scene was someone the character we get to know more in the film, played by Russell Crowe, is someone he knew, as we see him clutching at his wedding finger that has a ring on it, before he begins to reel the viewers in with his actions, and this left me to question whether the people at the start of the film were of acquaintance to the man, as a short while later we find out he was in a zoned out mood at the lights, when Rachel ended up in a rage.

After exchanges of words when Rachel ends up in another traffic jam that she is working hard to try and avoid, she realises that the man is following her, and her son, in his truck behind them, before this small altercation of road rage which could have easily have been resolved by quick apologies, quickly escalates into full blown angered rage, where Rachel (Caren Pistorius) quickly realises she is dealing with a dangerous psychopath hell bent on revenge to make her suffer, and the film ends up in violent scenes, and innocent people being involved.

This film was a great watch for me, I enjoyed it a lot more than I first realised, and I had a few shock reactions, a few gasps, and a few “oh my goodness!” reactions too. I found I had been on the edge of my seat for the whole duration of the film and felt very much gripped from start to finish.

I enjoyed the acting, the characteristics of each character, felt real, as nowadays you never truly know who you will encounter on your travels, and this film highlights that, from actions that are done within the spur of the moment, can flip someone and cause such rage and anger that they end up taking things a little too far.

I enjoyed the acting of Russell Crowe, the way he managed to portray such a deeply, angered man, was great to see, I enjoyed every second, and the production and directing of the film was great too, I think they made a good choice with Crowe as the lead for “Unhinged” as he played the role very well indeed.

I highly recommend giving this film a watch, if you haven’t already, it is worth the 1 hour 30 minutes, and will have you, like me, on the edge of your seat throughout!

UNHINGED is available on EST, VOD, DVD, Blu-Ray & iTunes in 4K from 23 November