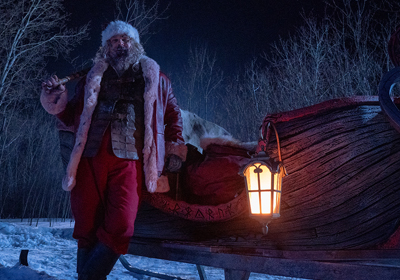 "Nothing silent about this loud Violent Night!"

Happy Holidays; get ready to flip from the usual light to the dark side of Christmas with one of the best Santa Slasher’s out there.. Tis the season; HoHoHo-micide! Admittedly, it's a very narrow subgenre, It's the season of goodwill to all (not just men now :P).

We have the great Director Tommy Wirkola who made Hansel & Gretel: Witch Hunters in 2013 and epic writers Pat Casey and John Miller screenwriters for Sonic the Hedgehog; combined, they truly gave us a gift that keeps us; well.. Forgiving. A very violent and seasonally funny Christmas present containing Santa Claus's sledgehammer and coal (very Thor-esque; which will make sense later..).

We first meet a drunken Santa at a local bar "I'm on a Break", where he explains to the shopping mall Santa why he feels so hopeless with the “job” now as he calls it... Santa numbs his pain in the same way these “ungrateful kids” are numbing their minds with their want for unimaginative presents such as video games. He profoundly drives away in his sleigh to end the scene. Wirkola provides the shocking first moment as Santa takes us into the kind of twisted tale we're about to experience. David Harbour known for Stranger Things and 2019's Hellboy is his old style.

Absolutely everything except for the charming portrayal of Nick. During the run, Santa raided a home liquor store, munching on cookies and glugging skimmed milk. As slobby & careless as Santa is, he still has a soft spot for the "good" kids but little compassion for the "naughtier ones" now; one would even think he would start to empathise a tiny bit at this point.

Most of the story takes place on the Lightstone family estate, there, one of the central affluent characters, Gertrude played by Christmas Vacation alum Beverly D'Angelo, is a ruthless matriarch who controls the overprivileged and dysfunctional family of daughter Alva (Edie Patterson) and her airhead actor husband Morgan (Cam Gigandet) and teenage son Burt (Alexander Elliott). Gertrude's son Jason (Alex Hassell), his ex-wife Linda (Alexis Lauder), and their precious 7-year-old daughter Trudy (Lea Brady) also attend the gala dinner. Santa Claus arrives at Lightstone Mansion just before a mercenary team led by Mr. Scrooge (John Leguizamo) raids the premises and takes the family hostage. Their oversimplified mission is to break into the family safe and escape with $300 million in cash.

Surprisingly, in the confusion, there is an actual resemblance of a story going around with the relationship between Santa Claus and young Trudy; he truly believes in her and challenges his doubts about the job and encourages Santa to keep fighting on; so to speak. Santa cannot explain the mystery of the "magic" of Christmas, but he knows that 1,100 years of marriage has its ups and downs.

This is clearly not for kids (sensibly rated R / 15), and they should be protected from this particularly antagonising protagonist. Nothing silent about this loud Violent Night! Director Wirkola immediately delivers a holiday masterpiece for those looking for a quirky world film that compares & contrasts from typical vanilla family films like It's A Wonderful Life and A Christmas Story, but with a modern sled-hamming, hard-hitting edge!