Zola(2021)
by Cookie N Screen (We Make Movies on Weekends) 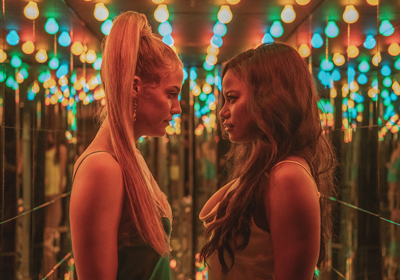 "Wanna hear a story about how me and this bitch fell out?"

The infamous Twitter thread from Aziah “Zola” King made waves on the internet years ago. The little, long tale of suspense captured the world like a Shakespeare play back in the day. The sordid tale was ripe for a cinematic outing.

Director Janicza Bravo is in the driving seat to bring this riotous road-trip to the big screen and, boy, do we go on a journey.

Zola revolves around the titular waitress and dancer who meets the mysterious Stefani (Riley Keogh) whilst waiting on her. The pair hit it off right away, heading out to the club on that same night and constantly messaging one another. The next day, Stefani invites Zola to Florida, promising more money whilst stripping. Bringing along her boyfriend Derrick and a mysterious man named X, Stefani takes Zola on a ride full of sleaze, sex, and the biggest dick you’ve ever seen.

The movie opens with Zola and Stefani putting on make-up in front of a set-up of mirrors. The hazy, gritty aesthetics and pastel tones mixed with a dream-like harp score by Mica Levi sends us straight into this fantasy. It is almost as though we entered those seventies adult movies with the pink colours and lush set design. Bravo is inventive with bringing this to cinematic life and Zola oozes with original charm.

Bringing to life this unbelievable story from just a thread of tweets cannot have been easy yet Bravo and writer Jeremey O. Harris do a spectacular job. The most important part of this screenplay is to flesh out Zola as her own person and not just a conduit to the audience. Paige is incredible at tackling Zola.

There is this incredible face she pulls that conveys so much worry, stress, and anger all at once. She’s funny but she is also emotional and that comes across in Paige’s performance. Riley Keogh has always been a deft hand at playing bizarre characters, plus Colman Domingo dominates the screen as the ferocious and unpredictable X.

Zola is an incredible wondrous whirlwind. A story in the heat-soaked concrete of America where creatures of the night roam. While it may not poke deeper into these characters, this is a sensational and surreal snapshot into nightlife. An exploitation of both male desire and female bodies, Zola is a bold, daring, and courageous outing for Bravo.

And for that, we do indeed, say bravo. Send tweet.