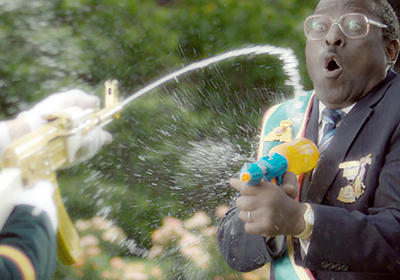 The titular pun aptly sums up the diverting subject matter of this affectionate documentary. Filmmaker Lloyd Ross takes a look at the sociopolitical landscape of post-apartheid South Africa framed in the unconventional (and uniquely South African) context of contemporary Nando’s advertising. Known for their daring and singular voice, they became one of the country’s best-loved and most archetypal brands. Made with the co-operation of the restaurant chain and talking heads from representatives of the marketing companies they worked with over the years, Ross’s film celebrates the moral stance and distinctive character of the little chicken shop that could.

The film’s narrative hangs on the television advertising campaigns for the company in the 1980s and 90s; Virtually unknown outside of South Africa, and entirely emblematic of the era, they were risky, of the moment and always a talking point. It is a fascinating insight into a company that has largely played it safe elsewhere in the world.

Although Nando’s has a reputation for being “cheeky”; only in South Africa is it seen as defiant, a voice for the people, a chain with a strong social conscience. The film effectively illustrates the significance of the rise to popularity of Nando's and captures a lot of the spirit and energy now fondly remembered by South African's who came of age in the era.

Ross’s film is a loving and informative slice of life inside the early years of the New South Africa and paints a rosy picture of a company that didn’t always get it right but had heart and was willing to make a stand. Perhaps too easily uncritical of the choices made by the commercial arm of the chain, it is nonetheless a charming and edifying watch that gives voice to the ordinary people and striving business owners of a country beset by assumptions and stereotypes from Britain, especially.

Guaranteed to raise a smile, and a few eyebrows, though it could have stood to dig a little deeper and present more substance alongside the confection. 'Pluck' is a pleasing watch and a worthwhile potted history of a distinct time and place.