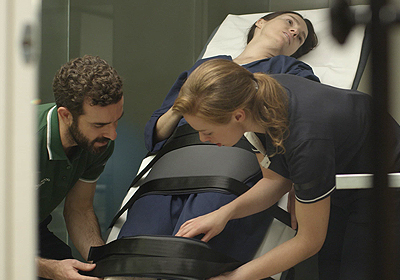 "This powerful story seems almost unbelievable, but is totally convincing, thanks to the excellent direction and strong cast"

The fact that this film is based on truth adds to the weight of the story. A gay occupational therapist begins a love affair with a handsome man after the breakup of his established but stale relationship. You think the new man, Richard, although somewhat arrogant, is genuine in his affection for the therapist Aris.

But this is a tangled web of deceit as Richard is married and he turns out to be a wholly selfish and unlikeable individual, but it’s too late, Aris is falling for him. Richard’s wife, Anna, suffers a rare medical catastrophe, and by chance Aris is her therapist. He forms a bond with Anna as he helps her in her recovery, the two become close.

Meanwhile, Richard and Anna’s marriage, is not good and he has moved out, mainly because Anna has discovered evidence of an affair - she has no idea it’s a gay affair. And while she recovers and gets close to Aris, he is getting more embroiled with Richard. But Richard is keen to mend his marriage and makes efforts, mainly via their daughter, to weave his way back in, while becoming more unavailable to Aris.

Aris is thoughtfully played, caught between his love for both people, but never knowing the connection until much later. Richard has his affair, treats Aris badly, mends his marriage and goes home to his now fully recovered wife.

As an audience you are not happy that the egotistical Richard has got away with it. But has he? It’s amazing who you can bump into by chance…

This powerful story seems almost unbelievable, but is totally convincing, thanks to the excellent direction and strong cast. Aris, Richard and Anna are all persuasive and are supported by strong authentic characters, particularly Anna’s close friend and confidant, who babysits her daughter while Anna is hospitalised and Richard is excluded from both the family home and the hospital.

The intricate and credible story is well done, although sometimes a little too much is spelled out for us, which makes it a little pedestrian in places. It was a particularly satisfying ending, but I personally would have cut one line earlier.