The Harder They Fall(2021) by Federica Roberti 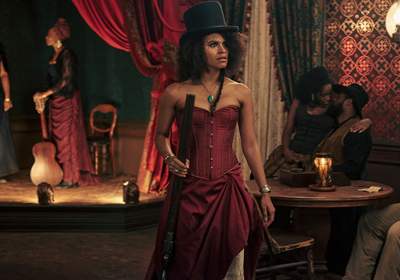 With such a stellar cast, one can only expect an impeccable product from Netflix's latest Western written and directed by Jeymes Samuel and The Harder They Fall doesn’t disappoint.

The story follows all the classic premises of any Western movie: Nat Love (Jonathan Majors) has spent his whole life hunting down the gang who killed his father and mother. Finally he has the opportunity to face the man who brutally murdered them when Rufus Buck (Idris Elba) is released from jail. With the help of his old gang, Nat has the chance to face his demons and avenge his parents.

At the beginning of the film, Jaymes Samuel makes it clear that, although a fictional story, his characters represent real life people who existed in America during the 19th century. The statement comes as a strong reminder that representation in Hollywood is still falling short. However, this doesn’t steal the spotlight from the film itself. The disclaimer at the beginning is just used to inform that black cowboys and outlaws existed in America and they were as much a part of the American history as white folks, however their stories have never been told.

As a Western, The Harder They Fall ticks all the right boxes. Each character rides the fine line between good and bad. Nobody is a saint, or pretends to be. They are all motivated by their own needs and desires in a world where it was easy to break the law.

What makes this film unique is not the fact that the entire cast is made up of black actors in a setting were we are used to seeing white cowboys riding into the sunset, it is more the way in which Samuel creates the perfect balance between comedy and gunfights, entertaining the audience in such a natural way that makes the 2 hour and 10 minutes running time fly by. There is a fast tempo that only increases throughout the movie until the surprising and explosive end.

The comedy timing is not the only aspect that adds flavour to the film, the soundtrack as well plays a huge part in the story. Although, throughout the movie, the sound mixing is too loud and the dialogue are at times mumbled throughout, the modern music used in the film keeps the audience alert and focused on the story.

However, a film can only be as great as the cast involved in bringing those characters alive on screen. The Harder They Fall doesn’t disappoint and every single one of the actors involved shares the spotlight with their co stars while bringing to screen an honest performance.

Idris Elba, Regina King, LaKeith Stanfield, Jonathan Majors and Zazie Beetz share the centre stage in a dance that is almost hypnotising. Every single character has their own opponent and all the actors fully commit to their performance.

It is also refreshing to see how women in this story are not just props or catalysts to the male protagonists’ mission; on the contrary, they are independent, equals and can take care of themselves.

Presented at the opening gala of this year’s London Film Festival, The Harder They Fall celebrates the western legacy by breathing new life back into this genre with a fantastic soundtrack and a fresh new take on historical events.