Eaten by Lions(2019)
by Tremayne Miller 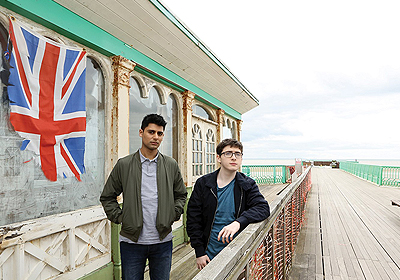 "a humorous and sympathetic voyage with the boys"

Eaten By Lions is the second feature film from director Jason Wingard whose debut feature In Another Life picked up the award for Best UK Feature at Raindance 2017, as well as the BIFA Discovery award.

It is an adaptation of the director's 2013 short 'Going to Mecca,’ which won the award for best comedy at the Manchester International Film Festival. This film tells the tale of one boy’s (Antonio Aakeel) search for self- discovery and his blood father.

Omar and his half brother, Pete (Jack Carroll) were brought up by their Grandmother, after their parents were horribly killed by lions. The death of their cherished Gran compels them to set out on a life-altering adventure, to sniff out Omar's father. What follows is a humorous and sympathetic voyage with the boys. The representation of the Choudray family is one of a sincere contemporary multicultural British family. However, what will Pete and Omar make of them, one might ask?

The theme of finding one’s real parents seems a popular theme at the moment, except for this time, Wingard puts a different spin on it, with some success. With the death of their Gran, the boys then find themselves at the mercy of Pete’s aunty, who clearly does not want Omar there, and on discovering a letter from his Gran with mention of his father he decides to seek him out. And so with the urn carrying Gran’s ashes tucked safely under his arm, Omar and Pete head to Blackpool, leaving Bradford behind. Their principal objective has been to scatter the ashes at the seafront, and look for Omar’s father.

Omar takes a copy of his birth certificate with him, as well as an old photograph of their mother, and the man who is meant to be his father. Several characters have been introduced in to this feature version.

The humour is the strongest point of the movie, which is wound round themes of loneliness and an urge for identity. However, not all of the scenes have been well thought out, and some of the arcs could have explored members of the family more.

The story is definitely carried off well by Omar and Pete, and their supporting cast members; Nitin Ganatra plays Malik Chaudhry, who’s supposedly Omar’s father, and Asim Chaudhry, Irfan, Malik’s younger brother. Tom Binns is the Fortune-teller on the Blackpool Pier and, in my opinion, the shine-out star of the film. Johnny Vegas is Ray, owner of a hotel, who puts the boys up when they first arrive.

Darshan Jariwala makes the most with what he’s been given but somehow is wasted. Matt North’s cinematography brings about a pleasing luminosity to the beaches of Blackpool and its nightlife. There are some amazing wide shots also, one, in particular, inside Sea World, set against a towering backdrop, of a shark tank and the characters’ silhouettes in the foreground.